Fine dining at these top taverna on Kythnos 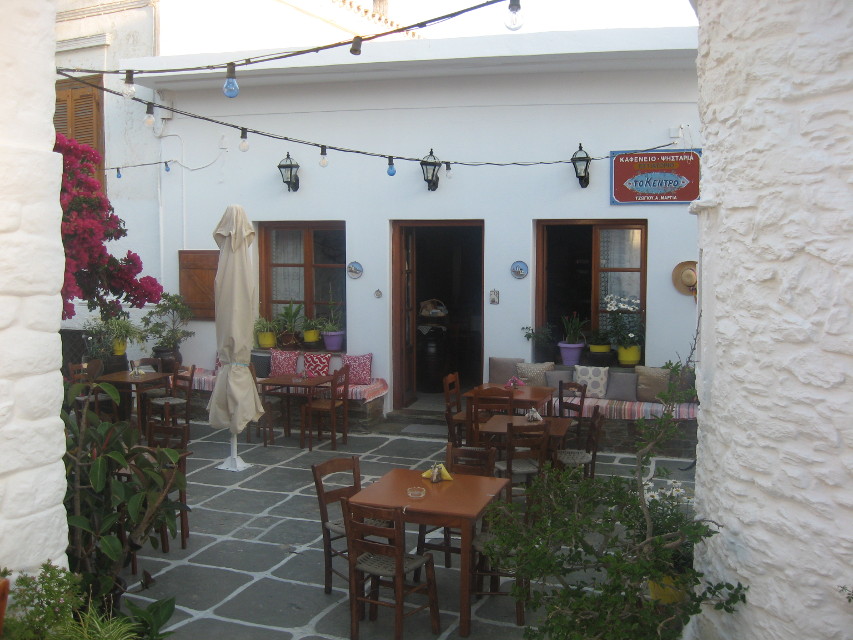 During the walking tours we like to dine well in the evening after the hard day of effort. Here are some of our regular choices for eating, stretching from traditional dishes, to Greek recipes "with a twist" and restaurants with fish from the sea mostly from around Kythnos. These 11 selected veer to the traditional food but always with quality and some variation. They are in no particular order. 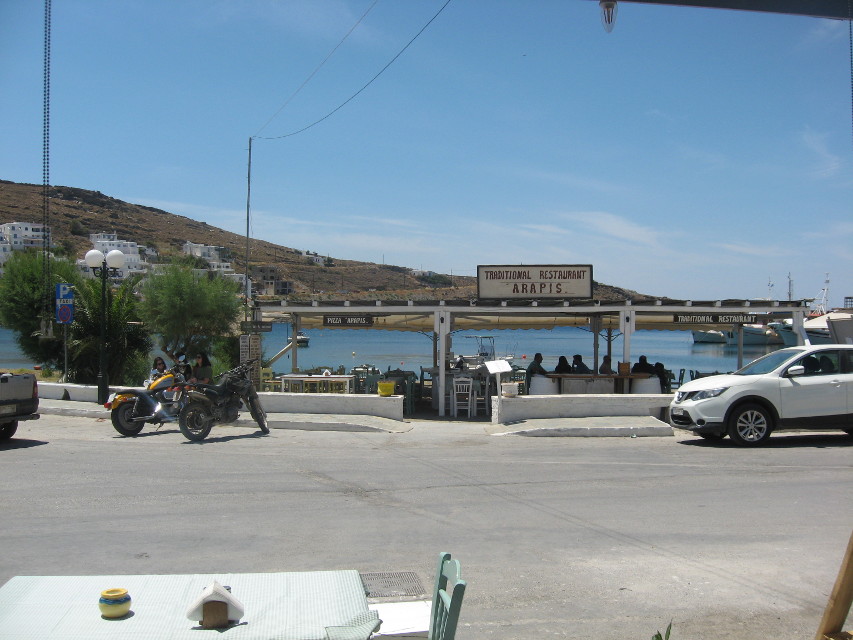 All the restaurants in Merichas have a view of ferries coming in and going out and allow for a five-minute dash to catch them or welcome them. The family-run Arapis opens through much of the year, unlike many of the seasonal beach taverna and bars. Its menu includes Italian-inclined pizza and pasta dishes. Its boss also is the only professional producer of wine on the island and runs free tasting of his red and white.

At the end of the path from our walk over the ancient city excavation Vryokastro, Dimitris's fish taverna is a popular stopping point with great view along the Apokrousi beach and across to the iconic Kolona beach, just a further 45 minutes walk. The taverna offers the full range of grilled or fried fish accompanied by salads. 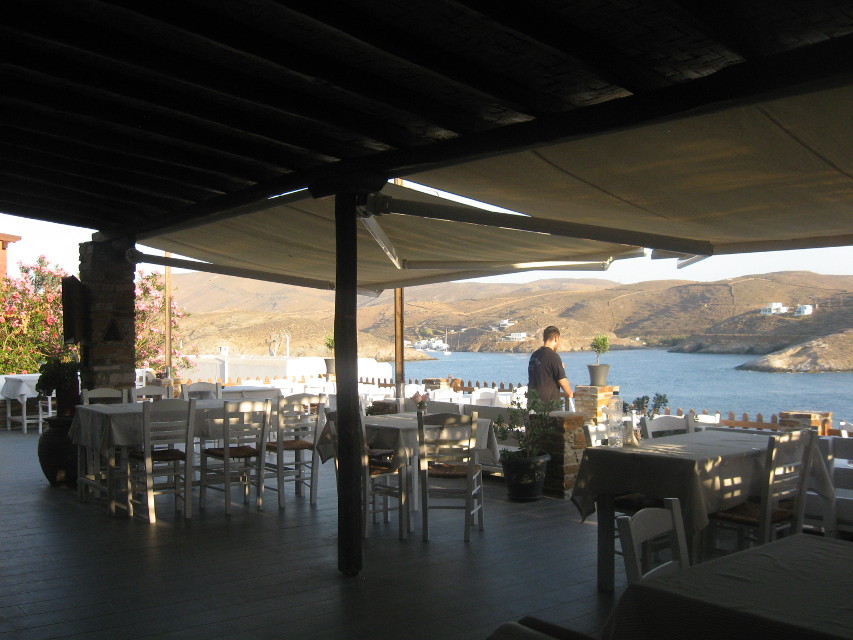 Katerina taverna has a beautiful terrace beside the Schinari beach. We favour Schinari for a dip after the walk down from Kastro Orias and the millenia-old settlement at Maroulas. Also the Katerina terrace looks across to Aghia Irene and the way back to Hora. The taverna has traditional dishes sourced from its farmland back at Maroulas bay.

On the road into Loutra from Hora, Koutsikou is favoured like the Katerina taverna for its straightforward offering of meat and vegetarian dishes such as chickpeas, lentils, bean and houmous. Regulars prefer these two restaurants to the ever-changing panorama of restaurants in Loutra itself aimed at the higher spending international visitors to the marina on yachts. 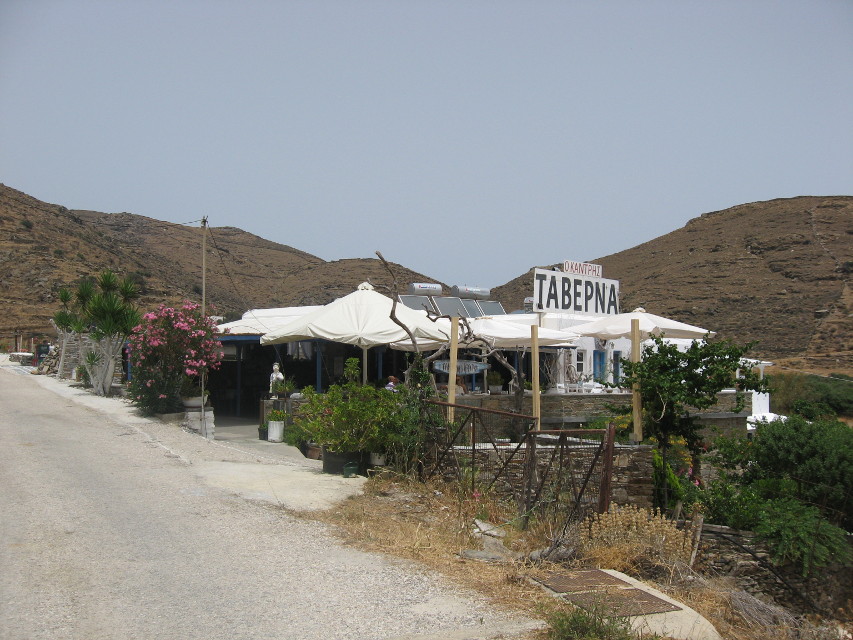 Aghios Stephanos is blessed with two excellent restaurants. (Apadou is found in our beach bar item). Kantris stands about 100 metres behind the beach where its terrace gives marvellous views of the bay and any yachts sheltering there. The food is sound and based on animals and produce grown behind or on fields nearby by the family. In the evening a romantic venue for dinner. 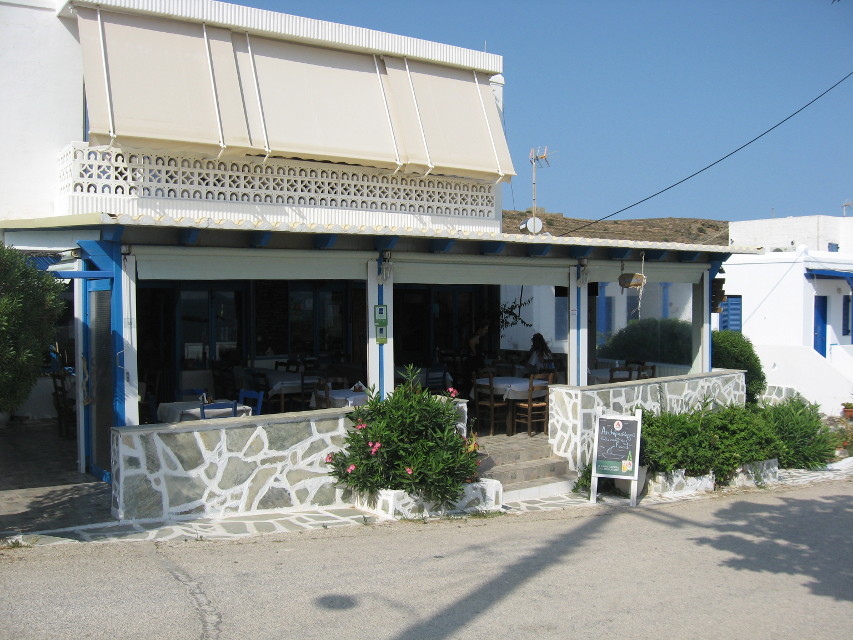 Kanala is reached via our path from Dryopida along the east coast and Kalo Livadi. Kanala is increasing its stock of appartments for holidaymakers. Archipelago is at the start of the village beside the supermarket and before the church. The food is renowned and Dimitris, who is in charge, can easily sell all his tables on a good summer day without difficulty. Book early.

Dryopida along with Hora are the two traditional villages on Kythnos. Dryopida perhaps is less developed for shops than Hora. There is only Pelegra as a fully functioning taverna. Pelegra herself is semi-retired though her family are still involved under the new management and revamp of the premises. Pelegra was a TV star. We will see how the new team continue her tradition. 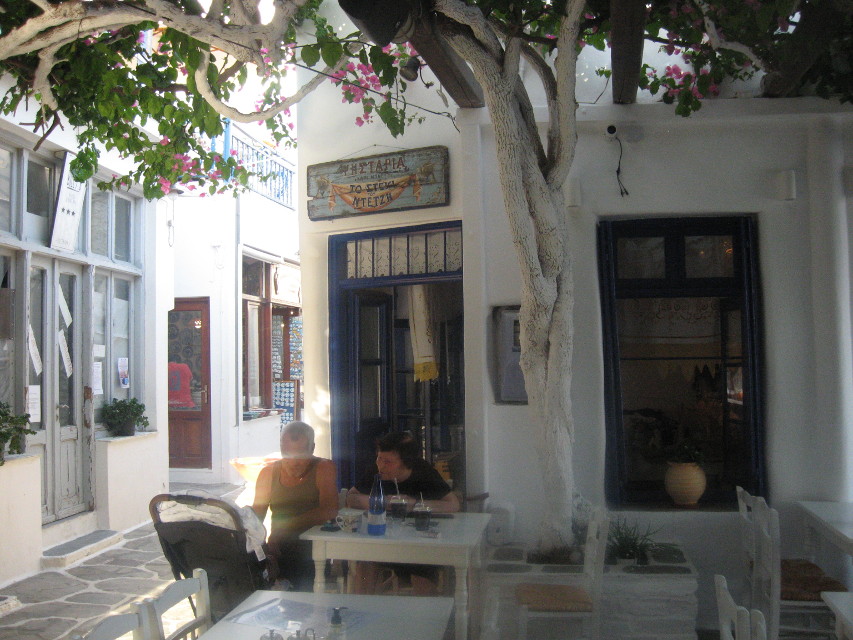 Hora is the administrative capital of the island and has the biggest choice of restaurants and bars in its narrow streets. To Steki Tou Ntetzi, usually known as Dezzi, is big on two terraces with a lot of tasty meat dishes and salads. The restaurant is in the middle of town and often handles wedding or baptism parties with large numbers.

At the start of Hora's pedestrian area, this taverna is down some steps. Flora is in charge of the cooking and her family help on the farm as well as dealing with guests in the evening. Her food is traditional with a big focus on meat in its various form. She also does veggie dishes such as gemista (stuffed peppers or tomatoes), fava beans and a range of salads. 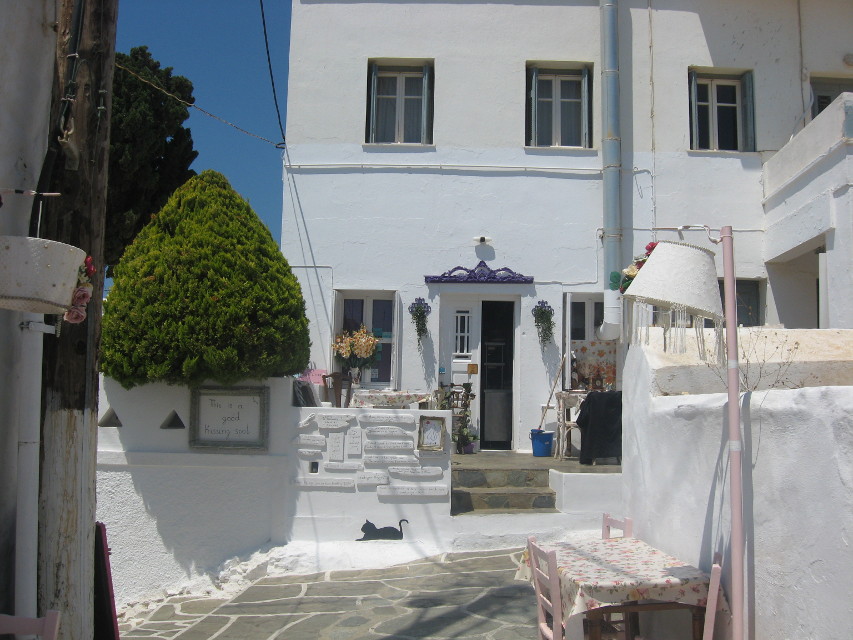 The backstreets of Hora are a maze in which to get lost and boast many churches. Psipsina restaurant is found down a short narrow street opposite the Hotel Messaria on the way into the town centre. In recent years the restaurant said it served Greek dishes "with a twist". This phrase has been dropped while the food stays the same, including fish, veggie dishes, and tasty salads. 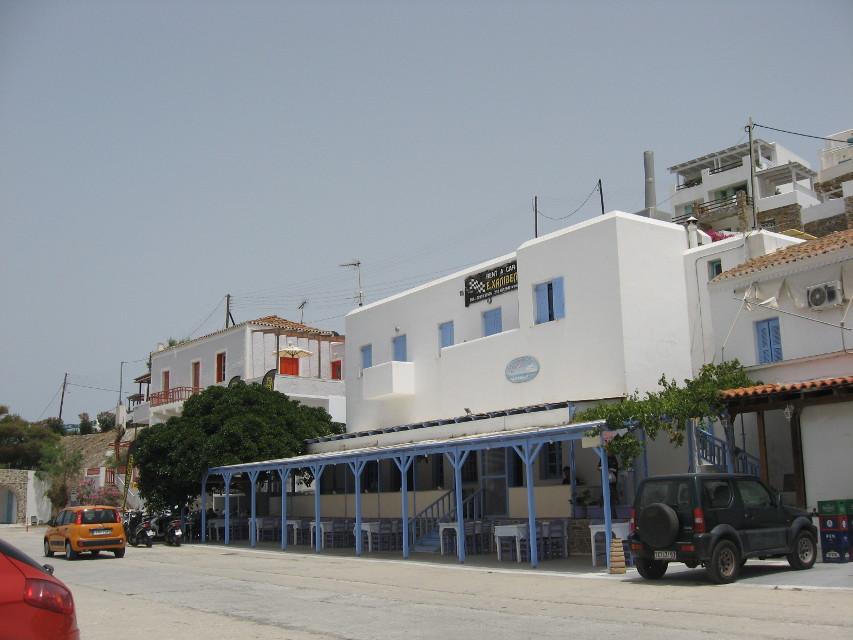 Ostria is near the dock where the ferries arrive and depart and opposite the quay where the yachts tie up. The taverna benefits from sailors eating their fish dinners after a hard day unfurling their sails, heaving to and other sailorly practices. Occasionally a sailor brings his own fish, otherwise chef Manoli draws from a large selection he keeps ready for all comers together with side dishes.