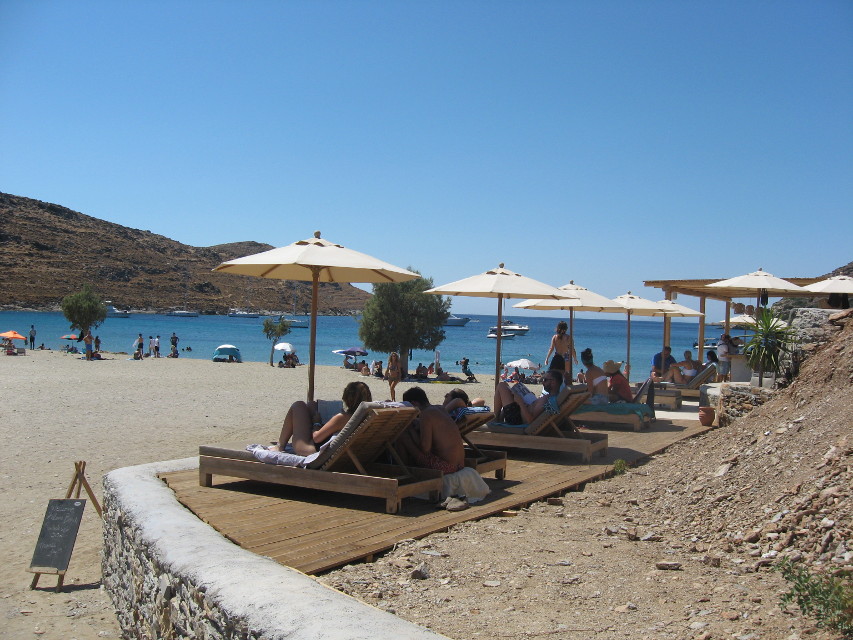 Here are some of the beach bars where we stop during the Kythnos Hiking (www.kythnoshiking.com) tours for a midday break and refreshment. Our choices are based on those bars which are tried and tested by walkers. The list also includes some traditional taverna which are often the best source of food and drink near the beach. The list will be reviewed regularly to ensure quality is kept up and to add newer bars which are proven. 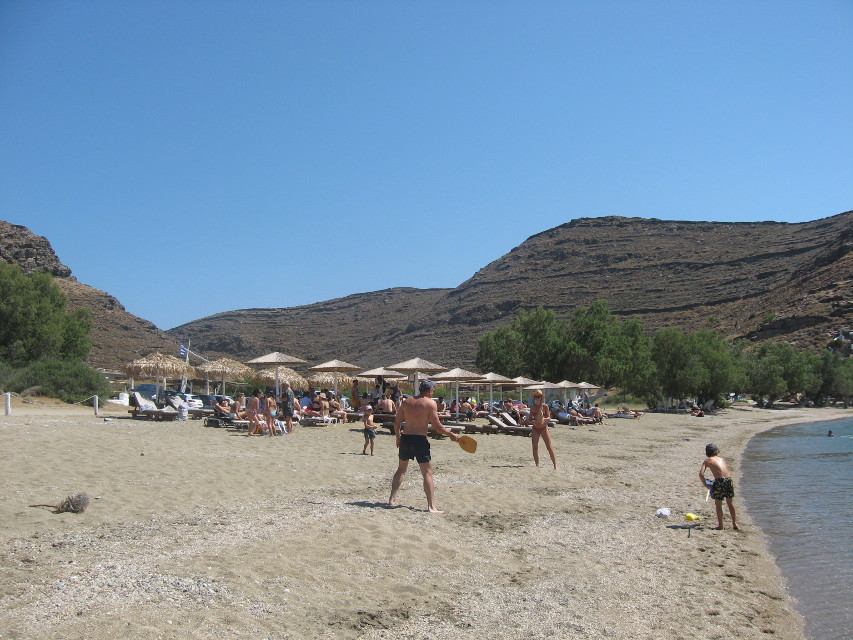 Apokrousi beach is probably the longest on Kythnos and Coconuts one of the longest-serving beach bars. Our tours reach the beach after the visit to the Vryokastro ancient city excavation - one of the highlights of our tours. The Coconuts bar itself lies behind the loungers in the photo and offers sandwiches, salads, and other light dishes. One attractive drink is the homemade lemonade. 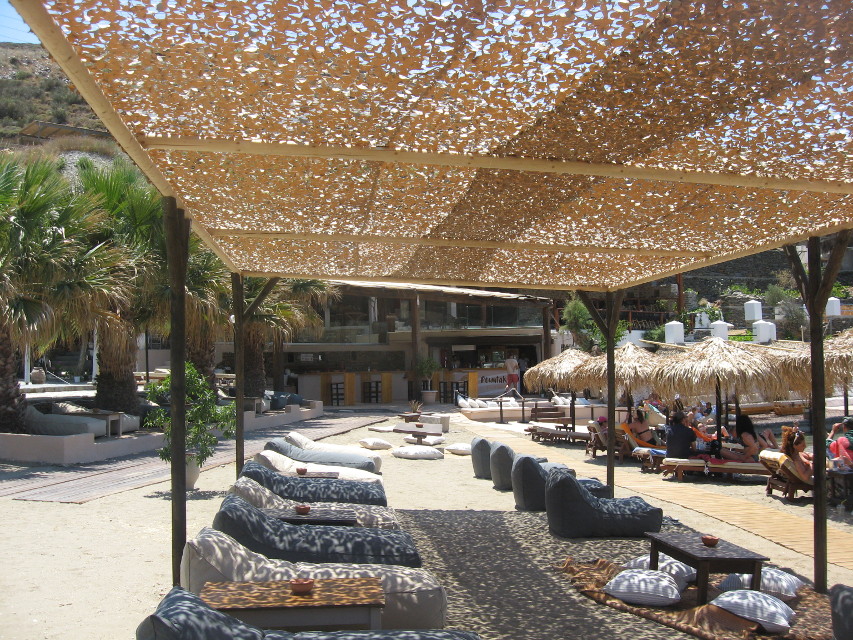 Episkopi beach gets popular during the high summer, partly because it is relatively near the port for arrivals as well as getting some of the best sunsets. Pountaki offers loungers, light food downstairs and more complex meals at its restaurant upstairs. 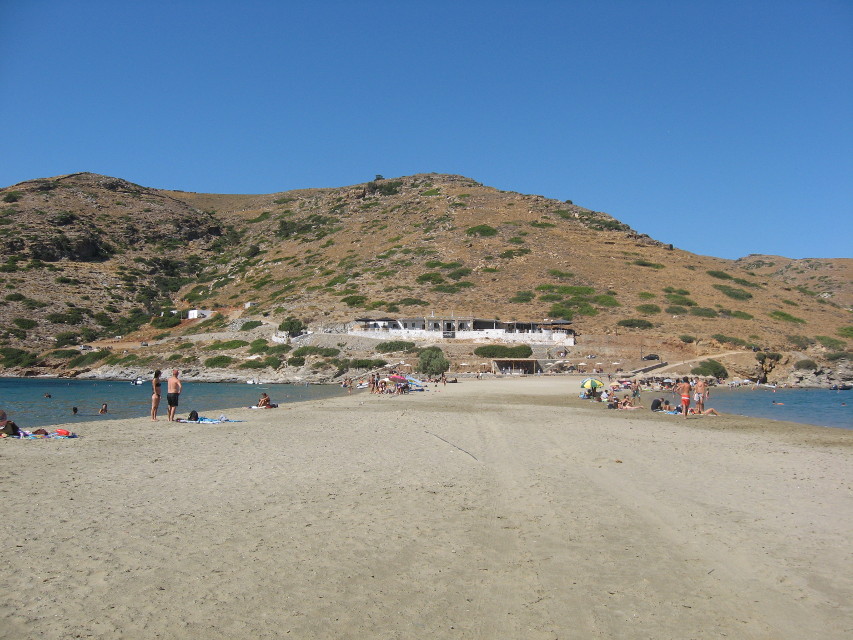 Kolona beach is a tombolo in technical geographical terms, meaning a beach where the sea enters on both sides. There are probably just over 20 examples of tombolo in Greece.The beach bar has expanded in recent years, including a cocktail bar down on the beach itself. Upstairs is a dining area and space for music and dancing which can go on late with guests from the multitude of boats anchored either side of the sand bar. 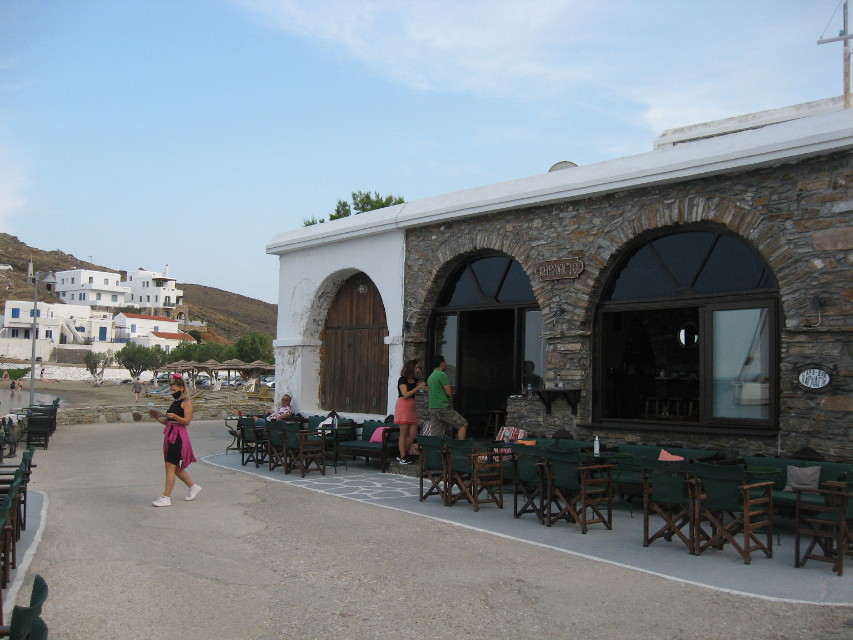 Loutra is the spa town and marina towards the end of our long walk up to Kastro Orias when strong refreshment is required by walkers, especially on a hot day. There are many eating and drinking options at Loutra in the middle of the day, many which change management year-to-year. Karnagio, like the Sofrano, is a bar beside the sea of a more long-lasting character and has added loungers in recent years. 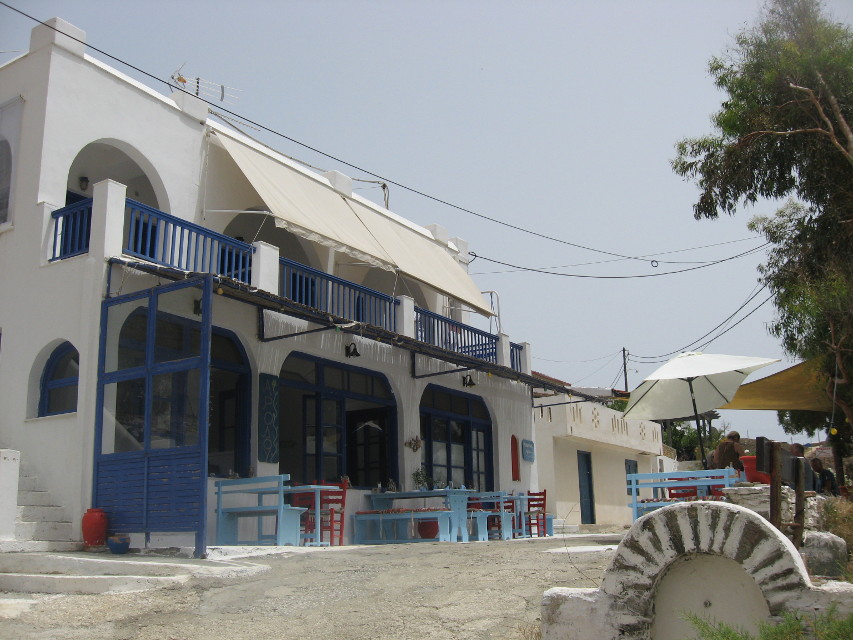 Aghios Stephanos beach is another location reached after a healthy hike to Aghios Ioannis and then some "secret" beaches. Apadou beside a quay used by fishermen and the Loutra-based scuba school AquaTeam for visiting wrecks in the bay. AquaTeam also provide walkers with face masks and flippers for those who want to snorkel in the bay to see wrecks or just colourful fish. At Apadou, Dimitris offers fish and meat dishes plus a large range of salads. 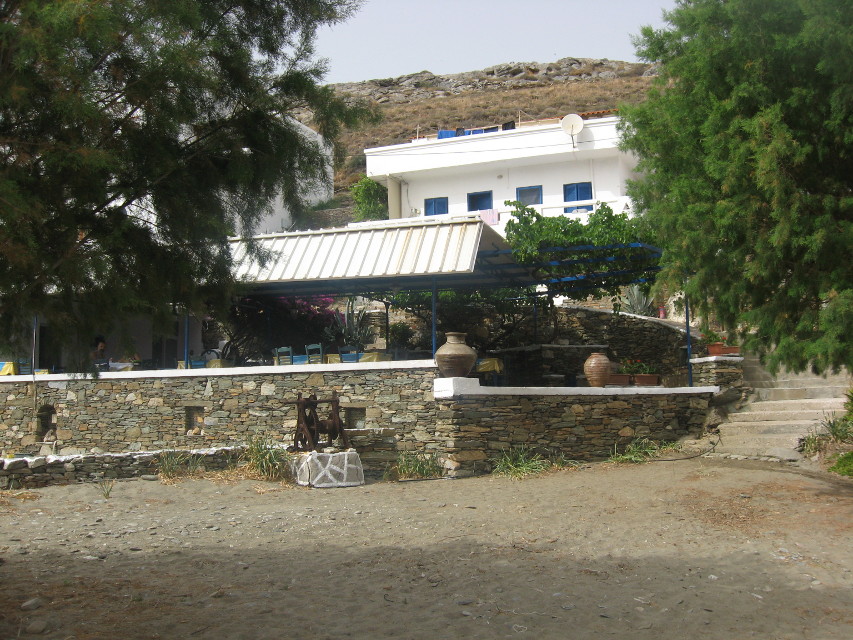 Lefkes is a three quarter of an hour walk from Dyropida via a well-kept path that passes fruit trees at various points including mandarins, figs, grapes, and mulberries at different times of the year. The path arrives at the opposite end of the short beach from the taverna. Food is traditional recipes and tasty, much of the ingredients sourced from the fields behind the beach a short way. 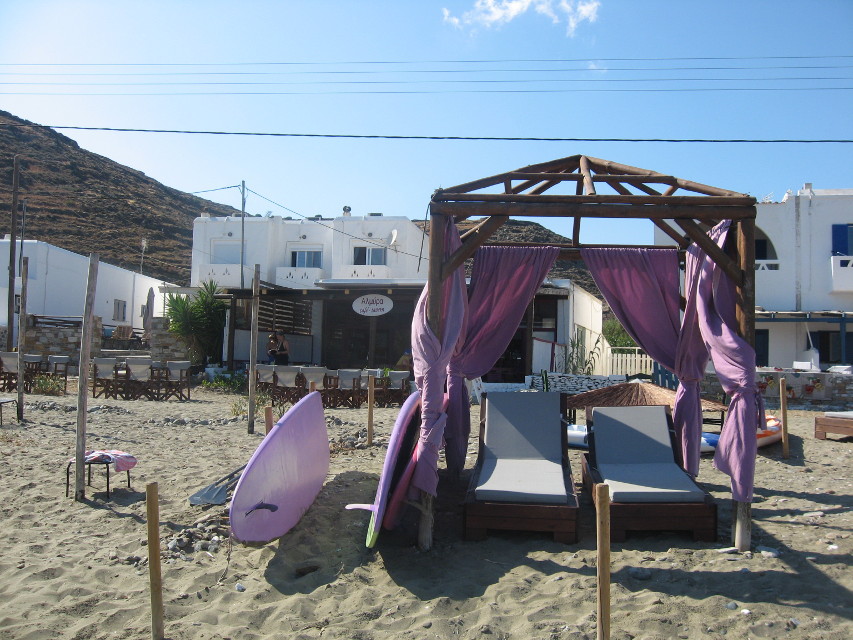 Kanala is an important religious centre and the end of our walk from Dryopida south down the east coast. The Almira bar on Kanala's bigger Megali Ammos beach, which is partly endowed with tamarisk trees. Almira also provides some shaded loungers. Apart from good traditional food, there is a curtained-off massage bed beside the beach, and live traditional music on Saturday evenings in the summer. 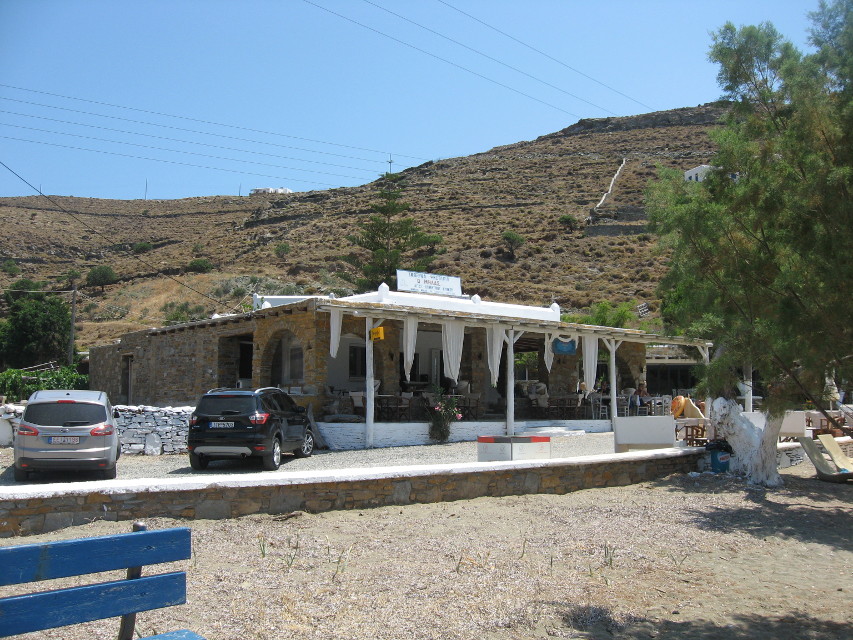 Far down the south of Kythnos is Aghios Dimitrios beach, which is not on one of our hiking trails but one where we can organise walking around the hilly terrain across this part of the island. Like on the other beaches, the Milas taverna offers traditional food sourced by the attached farm and recently added loungers on the sandy beach. 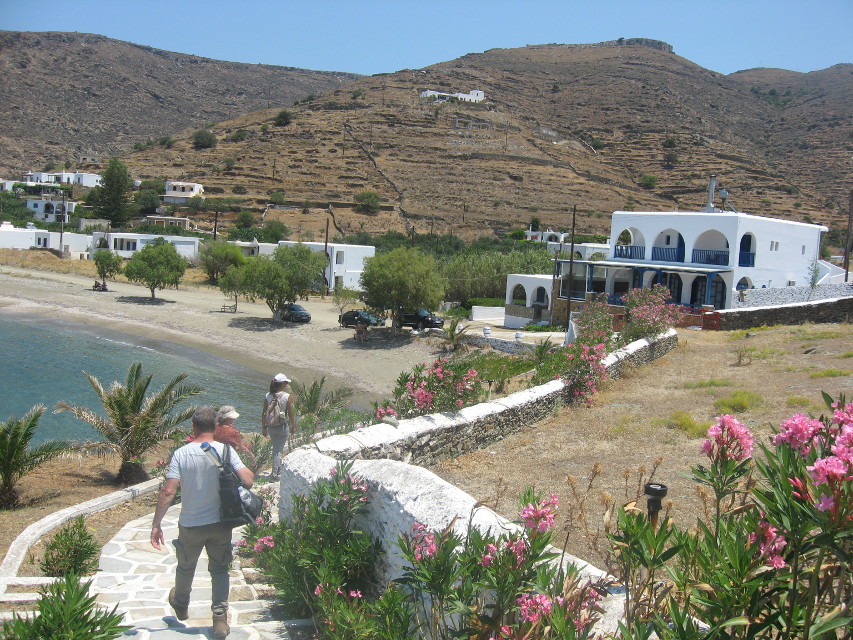 Flambouria maintains its quiet even in the height of summer, though on the 22 August evening it hosts a church festival, which is probably the livliest on the island. The taverna offers well-cooked traditional food such as its own goat dishes, moussaka, gemista (stuffed vegetables) and its inimitable Galaktoboureko custard pie dessert to round off the meal or just with coffee. 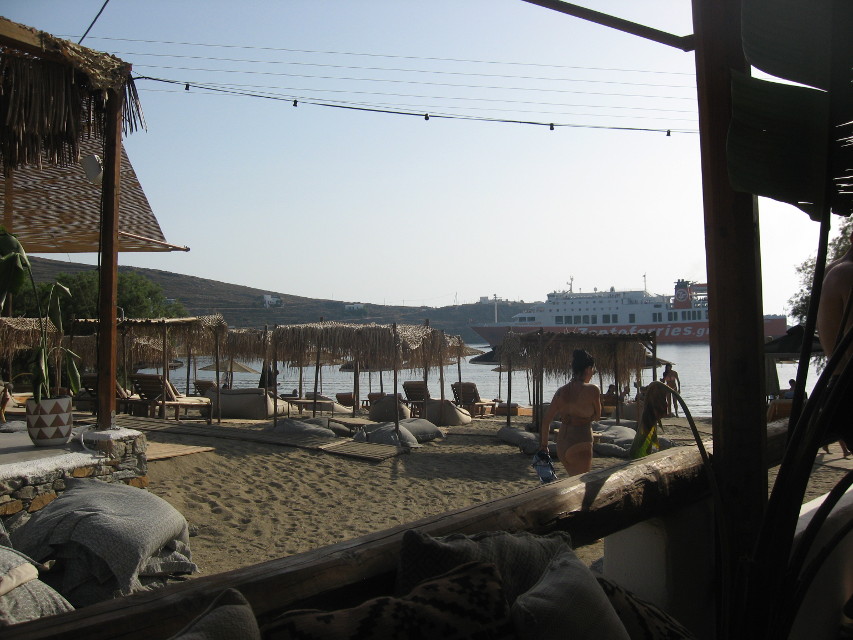 Martinakia is close to the port as the photo shows and convenient for a last dip before leaving the island while at the same checking the arrival of your ferry. It is a beach increasingly developed with loungers. Bar Hamsa spreads across most of the beach with its youth-focused drink and food offerings. In the evening the same people operate the lively late bar Kraken in the centre of Hora.