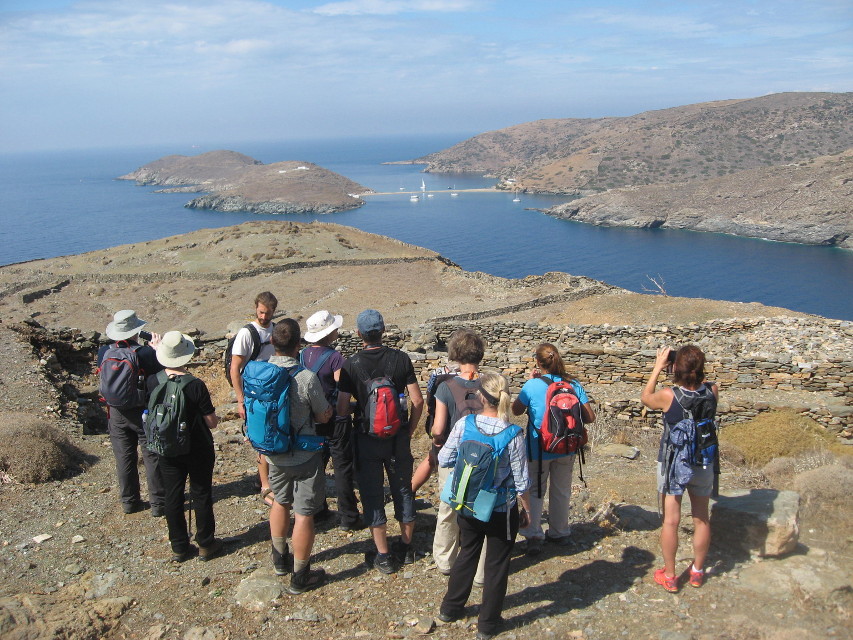 holidays on the Greek island of Kythnos, near to Athens, has chosen the 10

must-do adventures to include in your walking tour of the island, most are part of the

on-foot effort, others relaxing activities before or afterwards. 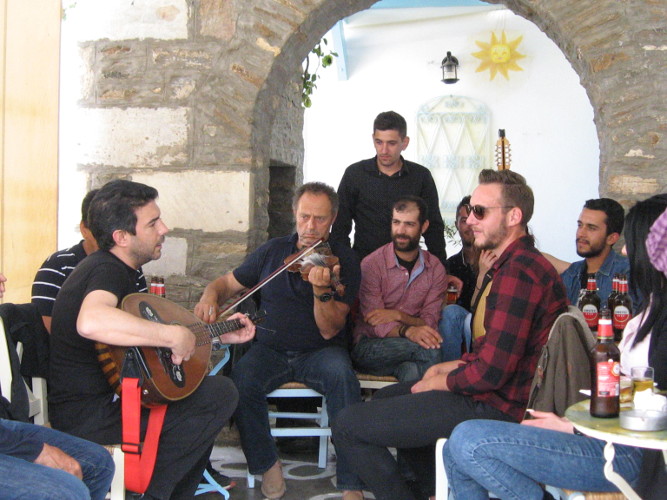 Kythnos Hiking (www.kythnoshiking.com) starts each day's hike at Stamati's Bar beside the

Filoxenia Studios accommodation that we use in the island capital Hora. Stamati is a

trained musician and regularly performs at weddings, baptisms, and other island events. He

plays the lute, usually in a couple with a fiddle player. Occasionally he will still be playing

the next morning after a long night of traditional music and dancing. Breakfast comprises a

basic dish of fruits and yoghurt, with eggs, particularly omelettes, bread and jam, and coffee

An easy walk across the verdant countryside of farms before the hill to Vryokastro, the

ancient city which goes back at least to 2500 years ago. Professor Alexandros Mazarakis

from Thessaly University, who has strong family roots on Kythnos, has been excavating

this historic site for the last 30 years.Each summer he brings students from Thessaly on the

Greek mainland, France, US and other countries to do the digging. After finding the key

to Vryokastro on the main island. 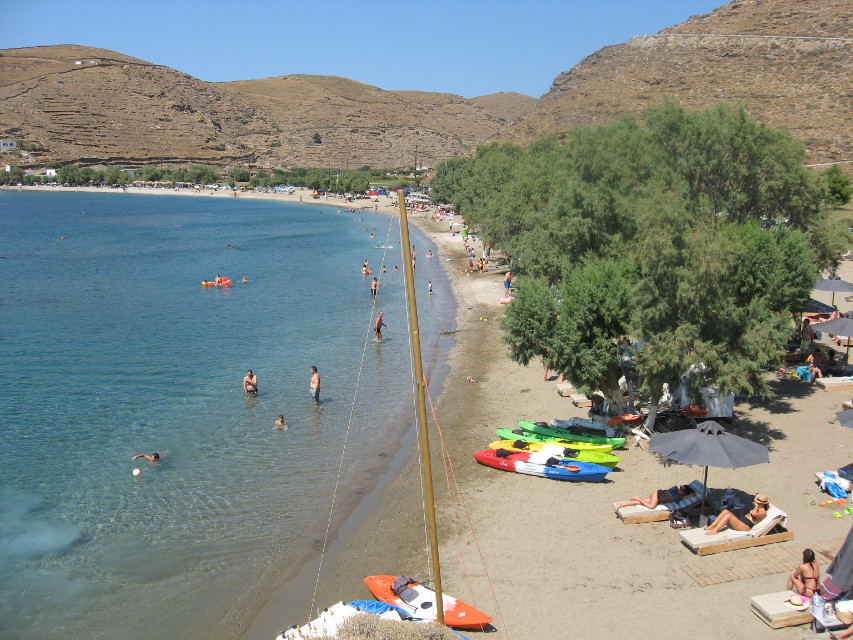 across to the iconic Kolona beach (see later). Apokrousi is probably the longest beach on

the island and like many beaches on Kythnos is backed by an abundance of tamarisk trees,

which provide shade. Apart from swimming in the clear blue sea there is a chance to hire a

sea side of Vryokastro. Coconuts is the older of the beach bars and plays lively music. It

offers service to those sitting on its loungers nearby. 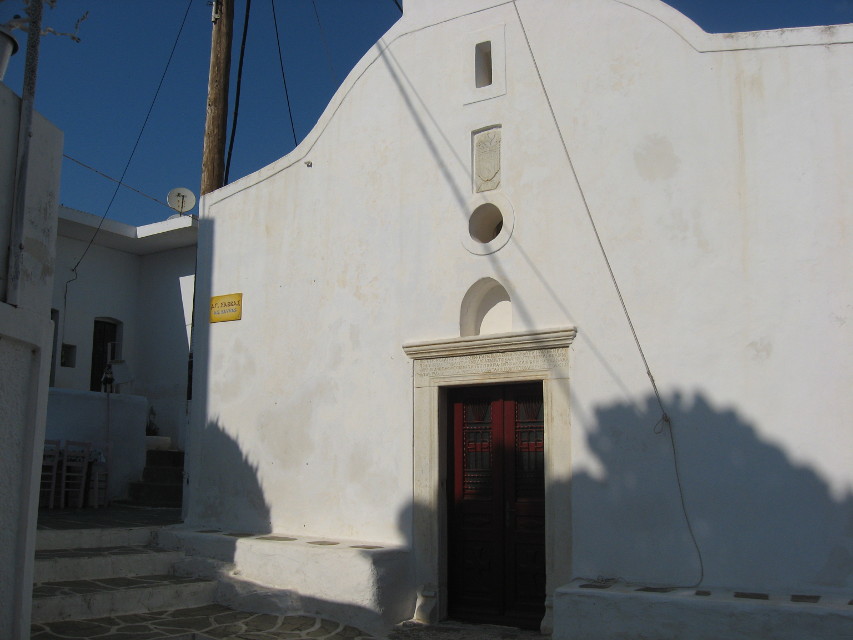 Taverna on Kythnos mainly focus on traditional dishes of meat such as goat, lamb, beef,

pork and rabbit. However, for vegetarians and vegans the Greek cuisine offers a range of

peppers and tomatoes (gemista) and the briam vegetable stew. Our site includes full

details. Psipsina in the Hora backstreets offers Greek food "with a twist" with a series of

dishes with interesting flavours and accompanied by Greek wines. Dorina, a former DJ, is

your host and explains the variety of starters and main dishes. 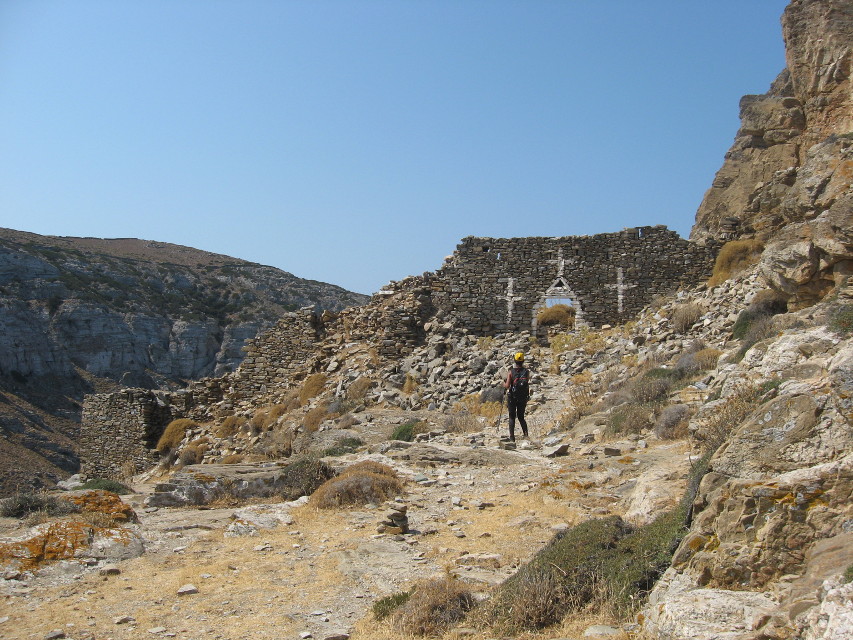 of the Loutra port village and marina. In spring the route is full of spring flowers and

migrating bird species. The Kastro was sacked by the Turks in the mid-16th century and

remains ruined apart from a church with painted religious scenes. The views across the

protected the settlement from siege for 10 years. The site has been inhabited since 3000

years before Christ as well as in the Byzantine period. 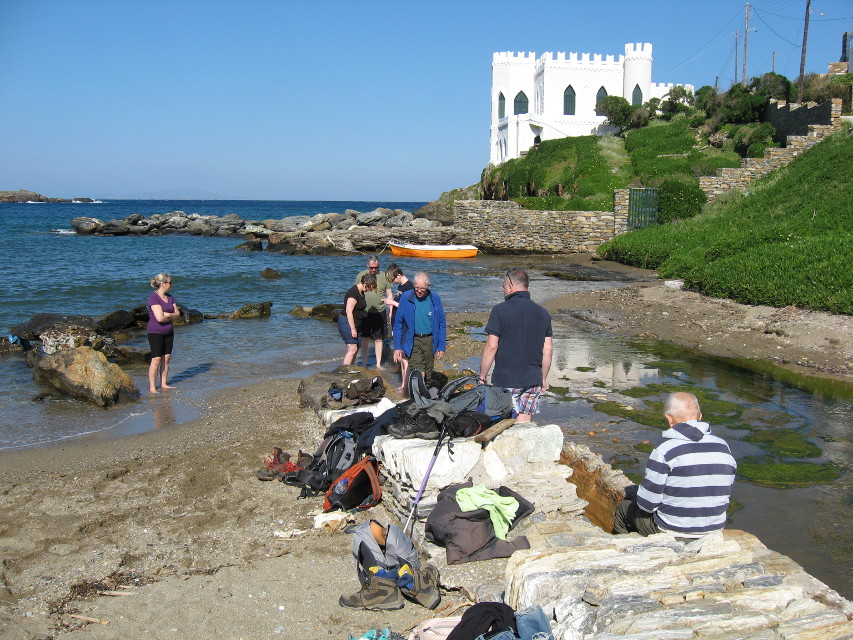 The walk back from Kastro Orias to Loutra goes via Maroulas, the excavation site of a

10000 year-old human settlement, possibly the oldest in the Cyclades islands. Part of the

site is no longer visible because of a rise of sea levels over the years. Loutra itself has hot

and a hot pool at the side of the beach throughout the year. Loutra is lively in the summer

with yacht visitors in the marina, various fish and traditional Greek restaurants, and bars. 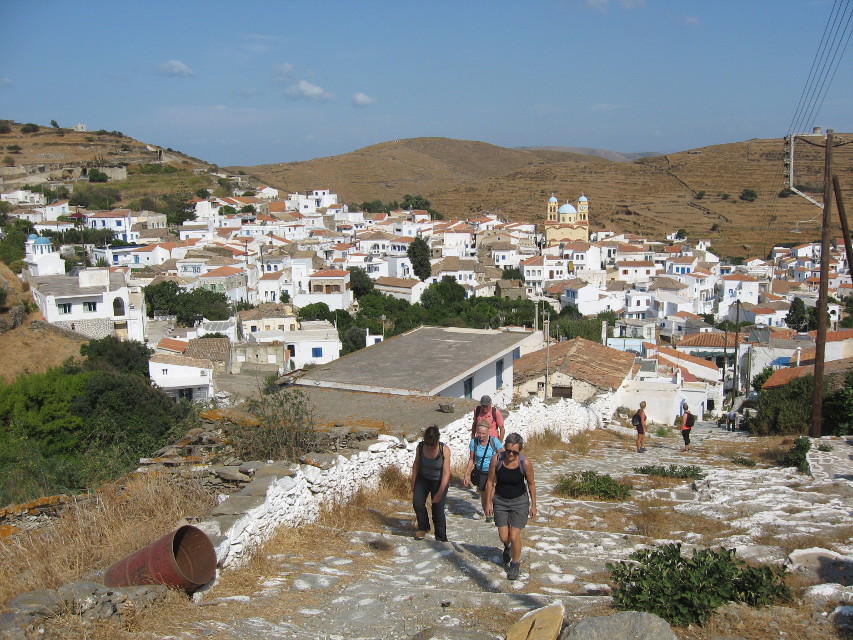 Dryopida is the second main traditional village on the island, after Hora. White-washed, red

valley to protect it from marauding pirates in past times. Apart from numerous churches,

restaurants, bars and shops, the village boasts an impressive cave, the Katafiki, used until

recently as a hiding place in difficult times. Tours of the cave show off the stalagmites and 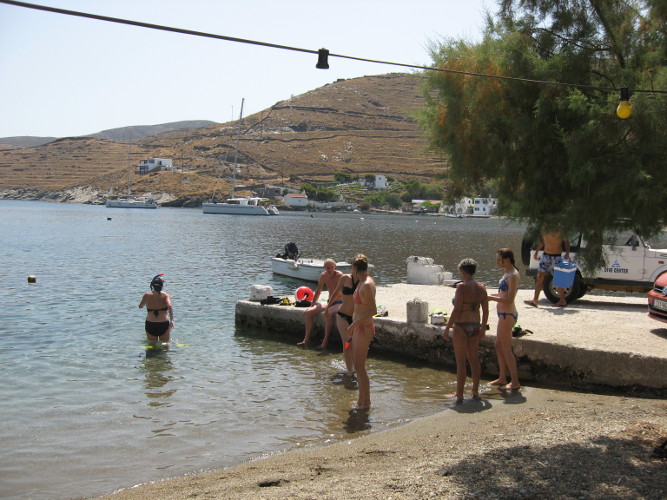 Kythnos has an active and highly professional scuba school and diving centre,

(www.aquakythnos.com) based in Loutra. One of its favourite locations for either scuba or

investigate as well as colourful fish. Access to the bay's waters are beside a small quay

also used by the occasional fisherman. After the diving there are two taverna at which to eat

and drink: Arodou at the end of the beach near the scuba quay is run by Dimitris; Kantris

which is 100m back from the beach has romantic views in the evening. 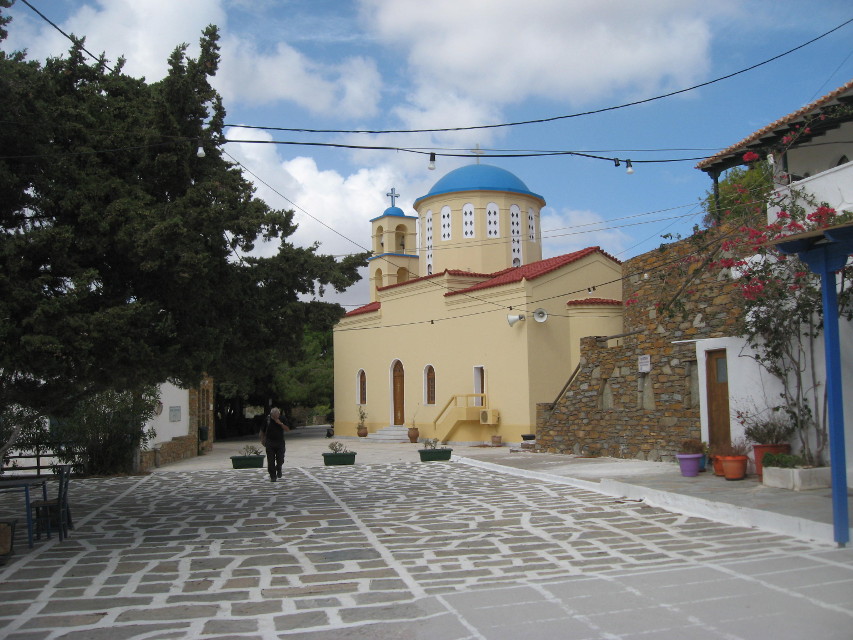 apart from Kalo Livadi. The route ends at the village of Kanala, the site of Kythnos's most

important church, the Panaghia Kanala, and the scene for a religious festival celebrating

the Virgin Mary in mid-August with a religious procession of its historic icon painting, music

and dancing. Kanala also offers upmarket accommodation and bars on the Megali Ammos

beach. Apart from its tasty food, the Almyra bar offers massage on the beach and 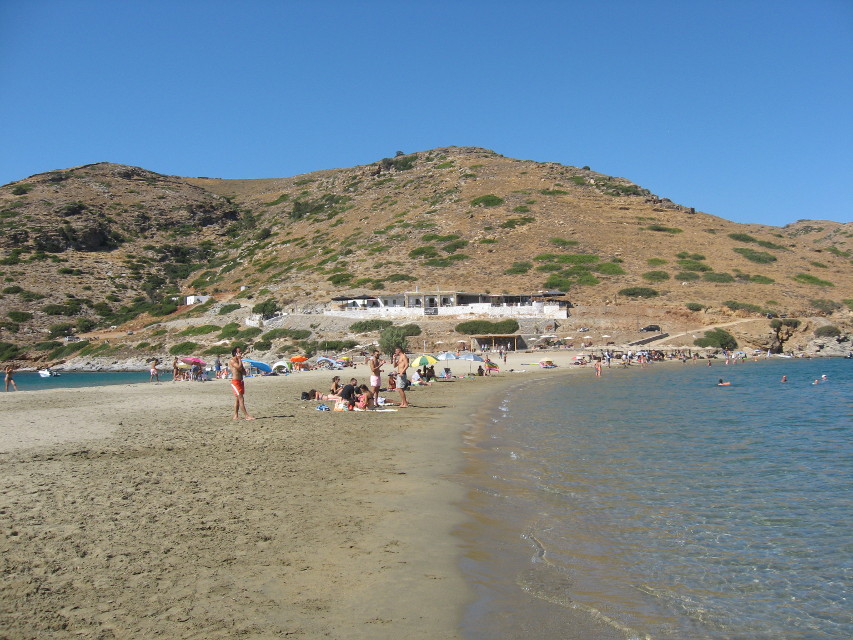 Kolona is the island's iconic beach, technically speaking a tombolo, an isthmus joining the

main island to the islet of Aghios Loukas. There are around 20 tombolo in Greece. The

with yachts and motor boats who line up on both sides of the strip. Apart from sea access,

Kolona is reached with a 4x4 vehicle or after a 40-minute walk from Apokrousi beach. Each

below the taverna and music bar of which it is part.

For more information and to book your Kythnos Hiking trip click here. We hope to