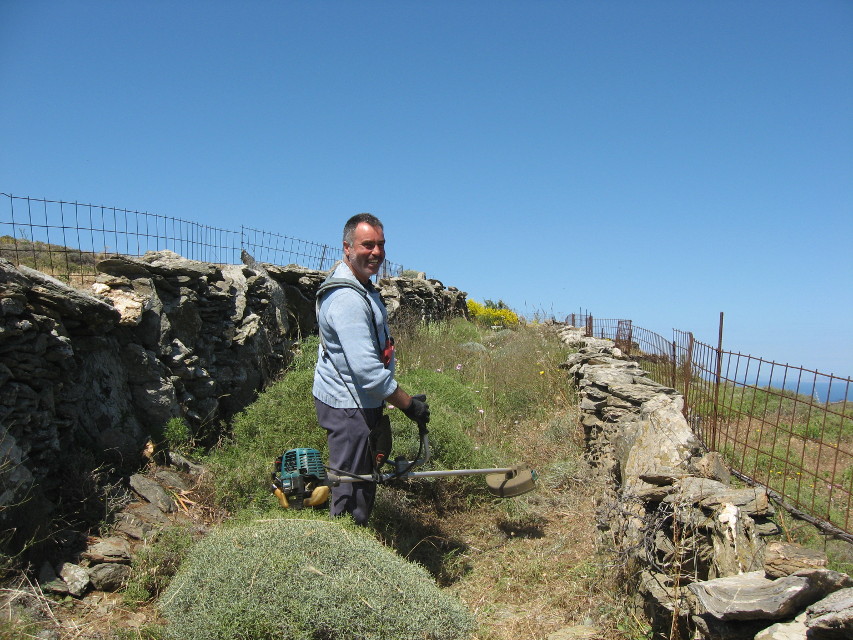 Aghios Konstantinos to Flambouria and Merichas has become the first path to get cleaning as part of a campaign by Kythnos Hiking to make walking the island paths more pleasant and satisfying.

Farmer Lazaros Giannitsanis became the first participant with his strimmer by starting to cut vegetation from the Aghios Konstantinos path near where it starts and where he keeps his goats.

Lazeros had to leave the frigana bushes which dot the path because they are too hard to cut at this time of the year. He said that during the winter months the frigana will be softer to cut.

The path (number 9 in the Kythnos Hiking Guide) is a stunning descent to the beautiful Flambouria beach which has a church on a spit dividing the beach and favoured for celebrations.

We hope that apart from the top bit of the descent cleaned by Lazaros other parts which are overgrown can be cleared of annoying vegetation to make walking easier.

Some other trails need a cleaning effort. Kythnos Hiking favours a private sponsoring effort on some paths combined with municipal actions on others where this works better.

Lazeros supplies his produce to Pelegra taverna in Dryopida where the goat and sheep meat is succulent.