Non-meat eaters will find plenty to eat on Kythnos and Serifos. Greece has many delicious vegetarian favourites and at the islands' tavernas vegetarian options are widely available.

Here are a few treats to look out for:

- Vegeterian Moussaka ('Moussakàs'): Very common version of the classic dish. Just the same, except without meat. Potatoes, aubergines, courgettes and tomatoes topped with a white sauce. 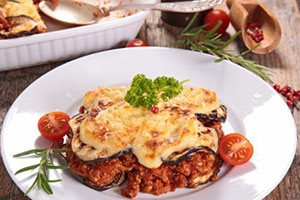 - Imam Bayildi: Aubergines stuffed with tomatoes, onions and other vegetables. Sometimes just called Imam, Imam Baldi and so on.

- Fried dough balls ('Keftedes'): You can get meat ones but very commonly they are stuffed with courgettes ('Kolokithο-keftedes'). Sometimes keftedes on Kythnos and Serifos have other vegetables in them, such as fennel ('maratho'). 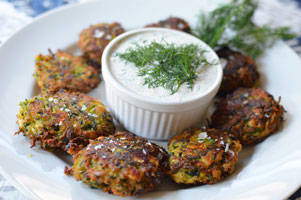 - Pies: Every bakery does Spinach pie ('Spanakopita') and Cheese pie ('Tyropita'). Pumpkin pasties ('Kolokithopita') are common and you can get other fillings, again like fennel.

- Stuffed vine leaves ('Dolmades'): Gemista and Dolmades are both usually stuffed with rice and herbs. Check that they are vegetarian, as they aren't always.

- Butter beans in a tomato sauce ('Gigantes'):  Widespread and tastier than you might think.

- Boiled Green-Leaved Vegetables ('Horta'): These plates of green-leaved vegetables are often served as a side dish. The diner is usually not quite sure exactly what leaves are in their horta but they usually taste all right.

- Black beans ('Mavromatika'): They can be served as a side dish or can form the basis of a stew or salad with other vegetables. Other pulses such as chick peas ('Revithia') are used in a similar way. Favα ('Fava') are split peas with olive oil.

Various Greek dips can be served as starters or side dishes:

- Tzatziki: Yoghourt and cucumber maybe with some garlic and a glug of olive oil.

- Skordalia: garlic and potato maybe with other stuff thrown in.

NB: Taramasalata is fish roe and not vegetarian.

Also note that many other vegetarian dishes, eg based on Artichokes ('Ankinara'), Beetroot ('Pantzari') or French beans ('Fasoulia), will sometimes be available as Greek tavernas like to cook what is in season.

-What haven't we mentioned? Yes, Greek salad! The famous salad ('Horiatiki') composed of tomatoes, cucumber, olives, green peppers and feta cheese is served at almost every taverna. With chunks of Greek bread, a Greek salad can be a satisfying lunch in itself. 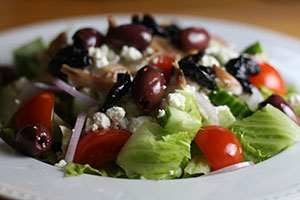